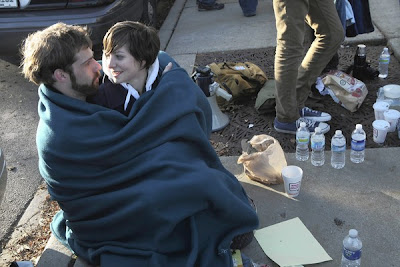 The housing committee meets three times a week to try to figure out how to keep things going in the often bitter Chicago winter. Clearly they are on a roll. I imagine what to do about frozen water bottles could occupy a lot of time at the UN-like General Assembly.

Meanwhile, a denizen of Occupy Portland threatens to burn down a woman's house.

I have a suggestion--go home. Your parents' basements are warm. And the professionals? Go back to your cushy union digs.

Continued sympathetic Trib coverage, (equating OWS to the Tea Party. Really? Me 'n Aunt Bea musta been busy)  Granted, Rahmbo knows "the movement" well and has not allowed them to camp out. But our President Barack Obama is conspicuously on the other side.

P.S. Leftist columnist overwhelmed, even in the family circle:

“This will be your chance to see Occupy Chicago,” I enthused to the boys, as we approached La Salle. The older boy — who really is like Michael J. Fox in “Family Ties” — fell into reverie about confronting the “bohemians” for their irrational Marxism.
“You do that,” I goaded. “Feel free.”
When we got to La Salle, the light changed, and we paused before the Federal Reserve and regarded the protest across the street. There was no drumming. There were five or six protesters, two holding signs expressing solidarity with the people of Egypt, who I’m sure appreciated the support.
“That’s it?” said my wife. “Pathetic!”
“Maybe they’ve marched off someplace,” I mumbled, as if I were responsible. “They sometimes go to Grant Park.”