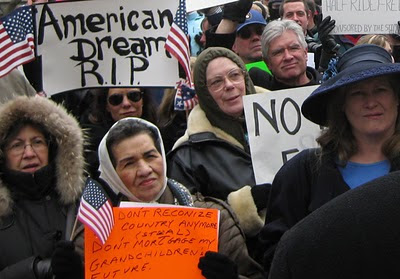 She's at it again.

We haven't heard this charge in a while, but David Axelrod says so, so it's gotta be true: Axelrod: GOP "In The Thralls Of This Reign Of Terror From The Far Right"

How about the morning newspaper: 1 in 2 new graduates are jobless or underemployed...

How about a calculator.

The real reign is one of misery for millions of Americans.

How about an open mind.

How about telling the truth.

We may not be a Mayberry nation, but many of us care about a cause greater than ourselves. America.

P.S. Hilarious week lined up for Obama, prez to appear on Fallon, Kimmel to roast him at White House dinner. Just hilarious Another One Down? Dutch Government Near Collapse
European political fears send euro, shares lower

--thanks for the recommended read, Pundit & Pundette