A classic confrontation, a classic duo:) It's American Gothic in the best sense, honest and grounded.

They're reacting to Obama with the farmer in the dell backdrop, Mr. Green Jeans or something, complaining about people putting party above country. Huh? This from a guy who was partisan from the get-go--the Tea Party jelled soon after that--and clobbered Paul Ryan to his face when he tried to put the country first.

Then there's his self-pitying, self-absorbed shtick--he thinks he has it almost as bad as President Lincoln? I swear he's veering into narcissist-delusional Blago territory.

What next, Marlboro Man?

As for the TEA party, in Chicago we first came out in Feb. 2009 to rally and toss tea in the river--American Gothic was there:) 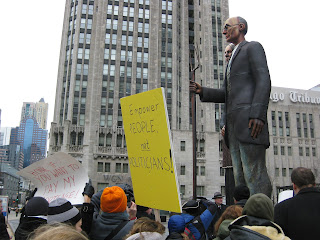 ...The Tea party is mainstream, its many leaders are majority women, but it is made up of citizens propelled into activism as never before by what they view as a constitutional and debt crisis for this country. Barack Obama is the most leftist president America has ever had, with a deep conviction that we need to be brought down to the lowest common spread/kill the wealth denominator, ruled by an elite that knows what's best for us even as they take the spoils of our labor, what's left of it, for themselves. We the people exist for the state in their world. Even our children and our children's children are conscripted for the good/debt of the state. We will all be the poorer for it--it doesn't work, it never has, and during its murderous 20th century rampage Stalin, Hitler and Mao killed millions and killed the dreams of millions more.

We the people see this future and we are not going to stand for it. Call us terrorists if you want, Dems-- it's in your mind, not ours--but we the people are freedom fighters. The Visceral Terror of a Tea Party Presidency: 10 Thoughts on the Coming Political Warfare of 2012