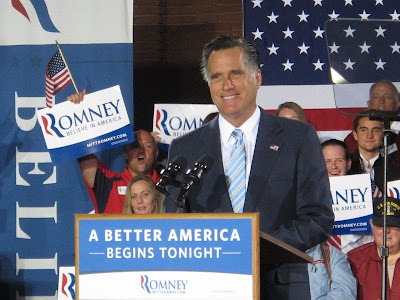 Tremendous speech, given with conviction and vision. In full, RCP video.

Finally we've got the authentic Mitt and he's talking straight to us.

Put that in your didn't inhale pipe and smoke it, Bill. Take that with your phony baloney promises and empty pandering, Barack.


Four years ago Barack Obama dazzled us in front of Greek columns with sweeping promises of hope and change. But after we came down to earth, after the celebration and parades, what do we have to show for three and a half years of President Obama?
Is it easier to make ends meet? Is it easier to sell your home or buy a new one? Have you saved what you needed for retirement? Are you making more in your job? Do you have a better chance to get a better job? Do you pay less at the pump?

If the answer were “yes” to those questions, then President Obama would be running for re-election based on his achievements…and rightly so. But because he has failed, he will run a campaign of diversions, distractions, and distortions.

...because the DCCC sent out this appeal for funds with this lame confirmation of everything Mitt's said:


Did tonight’s Mitt Romney speech make you want to throw your remote at the TV?

He must think he can distract voters from his extreme agenda by lying about President Obama. And he could be right.

If Romney and the Republicans can erase their radical record...

Ryan,who comes from a hard-working many Dem district on the Wisconsin Illinois border, whose plan merely slows spending but pulls us back from the fiscal cliff?

Is it radical to demand the Dem Senate pass a budget? Is it radical to blast this president with HALF of new college grads jobless or underemployed? Huge numbers moving back in with their parents? Facing massive student debt. Expected by feckless Dem leftists running this country to shoulder enormous fatboy gov debt?

Three generations sitting around the kitchen table wondering how to make ends meet?

Demand for long-lasting manufactured goods dropped by the most in three years and a gauge of business spending plans fell, suggesting factory activity lost momentum as the first quarter ended.
Posted by Anne at 4/25/2012 08:28:00 AM