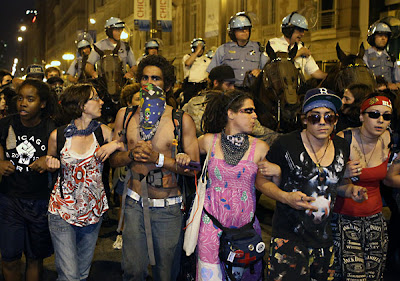 Another youth has joined the "beer-making" brigade. Tribune:


A Northwest Side man has been charged with terrorism and making a false threat, accused of planning to make a Molotov cocktail to be used during the NATO summit.

Sebastian Senakiewicz, 24, of the 3600 block of North Odell Avenue, is the fourth person to be hit with terrorism-related charges this week, but police would not say whether he is connected to three people arrested in a Bridgeport raid earlier this week.

A little help from my friends? OccupyChicago spokesperson, Zoe, says she knows the earlier 3, "they are actually some of my friends". Video at Marathon Pundit.

Yesterday not much happened, except for about a thousand brats roaming around Rahm's neighborhood, trampling neighbors' lawns, choking streets. My favorite moment, via Ustream coverage, was when some Occupy woman self-importantly told a regular biker, overwhelmed by the crowd stream in the street, that he was blocking their way. Cuz, you know, "whose streets? our streets?".

The 1st amendment only runs one way for the occupy babies.

Later in the day they invaded the pretty much empty Loop. The police suited up with more gear when a car window was smashed, and then a woman tried to grab a police bike. After much milling around, marching in circles, and looking around for the nearest media camera, they eventually staged a bumper climb on a police van. Brutality for sure.
Jonathan Hoenig ‏@JonathanHoenig

True RT @DLoesch: Every photo I see of an OWS NATO/Chicago march holds as much diversity as a photo of Obama's campaign staff

Anne Leary ‏@backyardconserv
Occupy Chicago says woman run over by police truck and police (corr. street) medics tending her. Really? If police had done that they would have ambulance

Anne Leary ‏@backyardconserv
Now it's a guy RT @OccupyChicago: Man is still conscious. Talking. But he cant get up. Trained medics handling it.

Don't see any of this on tape

Occupy Chicago tries to frame the incident, but look at this full video: Chicago Anti-NATO Occupiers Lie About Van Running Over Protester

As Illinois Review blogger Fran points out, here's the real tragedy of the night.

And before these spoiled and violent children of progressives, some turned to terror, become the latest cause celebre, can we ask about this one?
Why the Heck is Fidelity Investments
Giving Funds to a Convicted Felon?

More. Second City Cop. Why didn't Rahm deploy more cops nearby at the ready? And Wrigleyville joins Bridgeport in contempt for the Occupy brats...Comment:

Anonymous said...
I know it's already been stated, but these scumbag protesters are the 1%. I recently moved out of the city, but had I stayed, I would've been representing the 99% just like the people of the North and South Sides have done so far. These people are annoying at best and dangerous at their worst. How many millions are we wasting just so the highly oppressed white 20-something guy with dreads can run wild through the city messing up the daily lives of it's hardworking, tax-paying citizens?
5/20/2012 12:37:00 AM

Are you familiar with Second City Cop? Great blog with lots of info.

Oh right, yes. Thanks for the reminder Adrienne.