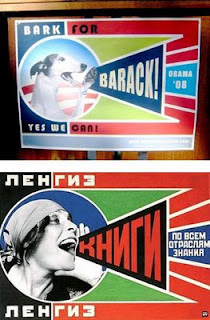 The president makes a big whole lot of nothing speech and takes a dictator's time to make it.

After his NY celebrity do, he's due in to Chicago this weekend for the Chicago Royal Wedding, while Rahmbo and his sidekick police chief try a new counterinsurgency strategy for the homicides that rock this city. Unlike Team O, to his credit Rahm's trying to fix the City of Big Shoulders as a place where small business can grow.

Romney is in town briefly tonight to challenge fashionista Obama in the money stakes, and with this ad:

Empty words, abysmal record and Bark for Barack won't cut it. Dress it up this time, but the underlying message is there from this president--You exist to serve us, America, you running dogs.

Residents of Charles Street, accustomed to the occasional paparazzi stalking their block in pursuit of Ms. Parker and Mr. Broderick, seemed to have little issue adjusting to the temporary inconveniences of a presidential visit.

“It happens,” said Ruth Abel, an executive assistant and an undecided voter who was walking her dogs Thursday evening. “The worst thing is they took away all the trash cans. So what are you supposed to do when you have a doggy present to get rid of?”