"They were enjoying frightening people"

...without provocation, they just attacked. I wondered who was working on a Sunday night, walking home at 10. It was a doctor:


He crossed Chicago Avenue, then went north on the pathway through the park, past the people playing tennis on the courts to his right, then out to Dewitt Place.

"I saw the mob of them ... young teenagers, tweeners between 13 and 15 years old, like young kids you'd see at the mall," the doctor said. "The thing I remember clearly was that they were enjoying frightening people. They went after a food delivery man on a bike. Then they went after me. It was like 'Lord of the Flies.'

"And then they hit me with something, a hard blunt object on the back of the head, and I went down," the doctor said.

Lord of the Flies.

Defining deviancy down. Encouraging a sense of entitlement.

And too often bowing to PC (listen to Betty about last year's Memorial Day beach beatdown) in reporting the truth. Cities under siege:


One Chicago resident has had enough, because there's another dimension to this. Isn't there:


Jon Loevy has made a fortune using the media to help him rake in tax-payer dollars from Thug Happy lawsuits.

Jon Loevy is as responsible for the North Avenue Beach closings, Boystown beat-downs, Anywhere Chicago thug beat-downs, 'crimes of opportunity,' Roseland 24/7, and the loss of revenue at Taste of Chicago, as all of the other bottom-feeding lawyers/activists how use the Sherwin Williams Race Paint in undermining confidence in Law and Law officials ( all cops, some States Attorneys, and the better judges).

If your kids ask why they can no longer ride the CTA and Metra, go to Grant Park, River North, McDonald's, Walgreens, Louis Vitton, AMC theatres, or perhaps with current City Council legislation,stay out in front of the house past 8:30 PM, tell the wee ones, "Jon Loevy needs to make more money, honeys"

Now that it's hitting State St. and the Gold Coast maybe something will be done about the culture that creates and glorifies this kind of behavior.

Occupy is part of the same mindset. Progressive babies on a rampage.

In London it was all out. Read Melanie Phillips from that time: Britain's liberal intelligentsia has smashed virtually every social value Yes we can. 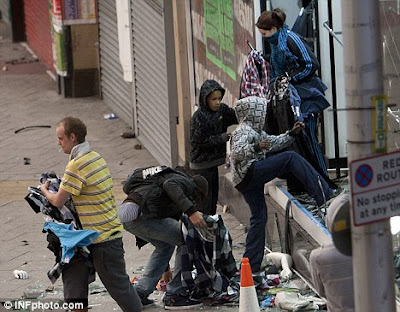 This is where we're headed, unless the country embraces cardinal virtues of old. Stop dissing the golden rule, stop sneering at the scout pledge. Stop trashing marriage:


Marriage is the foundation of a healthy society.


The first duty in civil society is toward one’s own children; everything else is built around it.

Stop taking God out of the public square.

Or it's Lord of the Flies in America.


--- But, in general, not much goes on in her sleepy, bucolic town. The residents rave about shopping sprees to Loehmanns and sprints to Whole Foods for organic strawberries. There is no crime to speak of; the local paper blares news about a recent traffic accident or the opening of a Trader Joe’s. So when Gail told me what happened to her son, I was absolutely dumbfounded.


He said it was a sad commentary on today’s society.

“This is so frustrating that there’s no sense of sacredness anywhere; someone who would just come and just throw paint around like this,” McNally said. “People who drove by, people were crying, people were getting out of the cars, ‘What we can do to help you here.’ It’s just not right. This is God’s house and people are doing this.”

McNally says the incident follows two recent robberies at the church. He says he doesn’t understand why anyone would vandalize the church, but his parishioners have come together to help.

If you finish school, get a job, and then get married, and then have a baby, you have a good chance. Isn't that right. And so does your child.