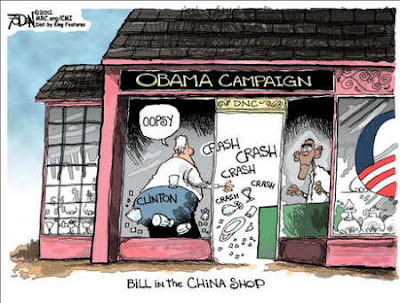 Really racking up the votes, there. We had "the private sector is doing just fine". Oops, that was at the White House. How unusual he's on the job.

Then we had the stellar session with the Sioux City, IA station. Iowa's always ground zero of presidential politics: Obama Surprised to Learn Obamacare Is Hurting Small Businesses

The Uncertainty Of ObamaCare Is Causing Small Business To Flat-Line

Uh, Barack, you really oughta know, you don't even need to pander to the hinterland to get hit with this one:  Chicagoland Shakedown: Why It’s Impossible to Run A Business Without Breaking the Law

Now we got Green Bay, you know that's in Wisconsin, Barack, now a key swing state:)


In fact, in Democratic-leaning Wisconsin, Republican voters actually outnumbered Democrats, something we have only seen previously in lower turnout midterm elections

Pop goes the weasel. Way to nail down the independent vote.

Perhaps this hasn't penetrated your big gov bubble yet either, Barry I got game:  Family Net Worth Plummets 40%

Meanwhile, Mitt's hitting the road. Including Michigan, now in the blue column, but:


Recent polls have shown Romney, the son of the late Michigan Gov. George Romney, trailing Obama in Michigan.
But an EPIC-MRA poll of 600 likely Michigan voters released Thursday showed Romney ahead of Obama 46 percent to 45 percent, within the 4 percentage points margin of error.
An April poll by the same firm had Obama up by 4 percentage points, 47 percent to 43 percent.

No word on the whereabouts of the Vader bus.

---thanks for the Recommended Read, Pundit & Pundette
and the link.