Holding Hands in Chicago. Who will Speak for Life 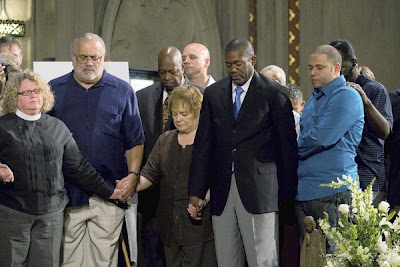 
An increase in homicides in the city sparked Monday's gathering. For the first half of 2012, homicides jumped about 39 percent over the year-earlier period, while shootings rose 9 percent.

"Chicago seems like it's become a war zone," Fields said.

Church officials, some with members directly affected by shootings, took turns at the microphone, encouraging one another and the public to combat the violence by contacting their legislators and demanding stricter gun laws, like an assault weapons ban, and by being better fathers, mothers and neighbors.

Chicago already has the strictest gun laws in the country. Actually, that's part of the problem. Criminals would be more wary if they feared concealed carry by law-abiding citizens. Illinois is the only state that doesn't allow it. But then, the elites have bodyguards.

The ministers deserve our support.

Now we want to hear them commend the virtues of chastity, fidelity--and marriage.

We want to hear them publicly mourn the young women who bled to death in a botched abortion. And the death of her baby.

In what world is this called an accident.

We need them to have the courage to call for a profound respect for life, so that our most vulnerable and innocent are not snuffed out.