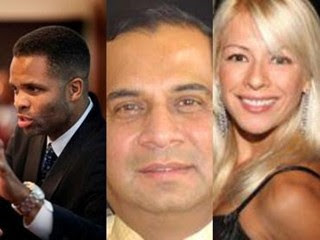 And Santita Jackson is on tonight with Hannity thanking the public for respecting the family's zone of privacy.

Ratting out Jesse Jr. $6M in Blago Pay to Play

Sure. Privacy, yeah. over and over again. This from then:


The congressman's wife, Chicago Ald. Sandi Jackson, 7th, issued her own statement later in the day asking for privacy.
"Today's disclosure, one that my family and I have been privately addressing for several months, is a very private, painful and unfortunate situation. Therefore, I would hope that the public will respect our ongoing personal handling and healing from this matter,'' she said in the statement.

Sandi's as big an enabler as Hillary to Bill. As she rakes it in. She can hold his uh feet to the fire, but his constituents don't count.

Jesse Jr.'s gotta go. Corrupt AND calculating to the nth degree. Disappears when his buddy gets it.

Junior won his primary against a Dem challenger in a redistrict. But there's someone else in his way. Thank the good Lord.  Support Republican Brian Woodworth.