About Dissing Sarah. We are not Team Romney -- we are Team America 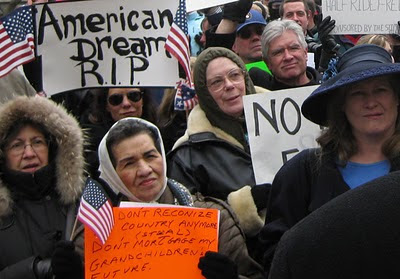 Message to Mitt and loser business as usual.

I know I'm just a small blog in blue Illinois, and a new Minnesota caucus goer, but in 2008 I was a Romney backer, and when McCain got the nomination I was on board--and became a strong Sarah Palin fan.

She carried the party in the darkest days, despite all the cowardly crap thrown her way, and she illuminated the path forward. Yes. Didn't she.

I think she bowed out for her family, this time and that July as governor. She loves America but she loves her family more. That's Ok. That's as it should be. Mitch Daniels made the same decision.

But her biggest crime, as far as the establishment goes, is that she tells the honest truth. Always. In her north country accent that sounds like mine. What a crime.

Now they're throwing this baseless stuff at you too, Mitt. What ya gonna do? Didn't you see it coming? You thought you could placate the left with niceness, you thought you were "moderate" immune?

I tried to go to the convention again but got the runaround this time. It's OK, Tampa in August is not exactly wonderful.

I agree with you all the way - 100% - we need to probably do more to impress the Romney campaign of the Palin factor. We would never be where we are in Wisconsin without her (and Breitbart - sigh) - true patriots.

They intensified the Tea Party wave, they inspired us all.