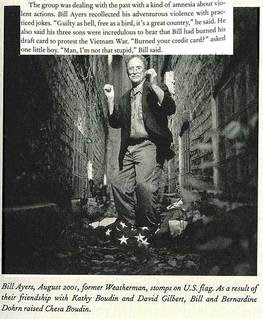 Per Megyn Kelly, Bill Ayers and his lovely wife Bernardine Dohrn just voted, at the same polling place as Barack and Michelle, naturally. A cozy neighborhood.

UPDATE: And the Rev. Wright voted after Ayers. Same place--do you think they coordinated so they wouldn't come in when The One was there? Now that would have been a telling photo op. Instead we got Joe the Biden on camera after Barack got done hogging it.

P.S. And Nation of Islam leader Louis Farrakhan. Political Punch. Not sure of the timing of all of this, but they were all there.

Finally, CityJournal, "The Ghosts of Grant Park", Obama plans a party where his radical friends once ran wild:

Should Bill Ayers and Bernardine Dohrn, by now the most infamous Chicago Friends of Obama, attend the Grant Park victory celebration, their lives will have come full circle. In October 1969, Grant Park served as a rallying point for several events during the radical leftist group Weatherman’s “Days of Rage”—four days of planned chaos in the Windy City. Born into wealth and privilege, Ayers and Dohrn marginalized themselves by voicing insane rhetoric exalting parricide and Charles Manson, committing acts of terrorism against the police, banks, and government, and remaining fugitives from the law throughout the 1970s. Now, 28 years after emerging from hiding, Ayers and Dohrn amazingly have a friend and political ally poised to win the presidency—one who hails from the same Chicago they once terrorized.