I first noticed this bizarre anti-tea party ad on my other site, The Middle Coast last night, and was amazed to see an attack on 10th Congressional District candidate Dr. Arie Friedman scroll across the screen. I see the ad is still popping up for me today.

I've endorsed Arie, been to more than one coffee, and their attack is a flagrant lie.

So who's behind this group? Who's funding them? What do you know, it's the SEIU. HotAir has the story: Another good reason to use transparency rather than McCain-Feingold for reform:

Lee Doren looks at the case of a new campaign effort called TheTeaPartyIsOver.org, and who’s behind it:

However, according to opensecrets.org, the 2nd largest contributor in 2008 to Patriot Majority was SEIU and other top Unions around America. I imagine the diversion of Union money gets much deeper than this.

And who has had a cozy relationship with the SEIU over the course of her liberal GOP political career?

Not only does SEIU/ACORN claim credit for Obama's victory in Indiana, they point to IL 11th CD US Rep. Debbie Halvorson as another 2008 election trophy. At the state level, several House and Senate members were helped by the SEIU: 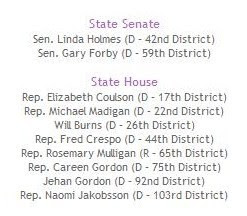 Note: State Rep. Beth Coulson (Glenview) is listed as a Democrat in the list, but she runs as a Republican.

One Beth Coulson, current state Rep., and also candidate for the 10th (not endorsed by her home organization by the way). Beth Coulson you are a disgrace. Why haven't you returned your SEIU money? Oh, because you are already funded by outsiders. If you had any decency you would denounce these underhanded tactics--hardly good government, which you pretend to espouse. From one of my earlier posts on SEIU/ACORN:

Yes, we have some Illinois Republicans involved that we need to root out. If they want to remain politically viable--and for some they are too compromised, given their records--they need to repudiate ACORN/SEIU totally. As for helping the poor--what are they really doing? They are victimizing them and skimming the money off the top.

We can't let these shady creeps win! SUPPORT Dr. Arie Friedman! Walk precincts if you can. I am. And VOTE Arie Friedman on Tuesday in the 10th.

UPDATE: I would add, not surprisingly Beth Coulson is one of the few Republicans who takes SEIU money. In response, the Friedman campaign had this to say. Campaign Manager Paul Miller:

"The Friedman campaign has been inundated with calls from across the country all supporting his candidacy and condemning this leftist smear tactic.

This attack against Dr.Friedman demostrates how the political left fears his candidacy," said Campaign Manager Paul Miller. "We hope our primary oppoenents will join us in condemning these smear tactics and the SEIU for funding such shameful antics."