A Tax on the First Amendment? 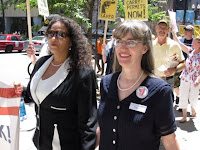 No. But why then a tax on the Second? John Lott looks at the latest Chicago gun law abomination passed in the wake of the Supreme Court decision striking down Mayor Daley's previous ban.

The city just endured the tragedy of a veteran police officer shot and killed in front of a police station. The assailant fought with him and shot him with his own gun. The killer had been in and out of prison, let go by lenient judges and politicians.

Some may say well, that proves your gun can't save you. I would counter the police officer probably thought he was in a relatively safe place, that he didn't have to be on his guard--in broad daylight. What chance do those of us not in front of a police station have against someone bigger and armed determined on home invasion or rape if we don't have a deterrent.

That is also why we need concealed carry in Illinois, to give criminals pause before they prey on their neighbors.

The Chicago gun ban did not cut crime and this new one won't either:

Photos from the Second Amendment Freedom Rally in Chicago yesterday. Colleen Lawson on the left, one of the plaintiffs in the McDonald v. Chicago case.

From the usually leftist Chicago Reader:

"We can't continue to focus on guns," Ford said. "It's not guns causing all the crime and violence in our communities. We can't just focus on more gun legislation in Springfield. We have to work on keeping these communities clean and fighting crime. People are stabbing people, people are beating people with baseball bats. This is about more than guns." [snip]

Gerald Vernon says he did everything he should have to get permission to hold a town hall meeting at the Tuley Park field house on the south side. He told park supervisor Donna Jones that he expected 150 to 200 people to attend, filled out the paperwork she gave him, paid $100, and walked away thinking he'd reserved a meeting room for the evening of June 30. The group that would be meeting was Illinois Carry, an organization that advocates for the right to bear concealed firearms.

But on June 23, a week before the event was scheduled, he got a call from Jones telling him his reservation had been revoked.

Vernon says she informed him he had to submit a new application. "She said it could be another two weeks and then a committee would review it," he says.

Vernon, a south-sider who teaches at Northeastern Illinois University's Carruthers Center for Inner City Studies, says he's long believed that citizens should have the right to carry concealed weapons, but became more active in the issue after his girlfriend was robbed last year. "People want the ability to defend themselves and Daley won't let them," Vernon said. "And last weekend we had more than 50 shootings!"

And the Cowards and Killings continue while the Mayor says guns are the problem.