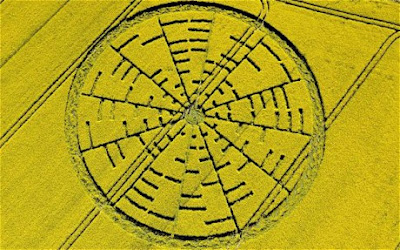 While we're waiting for the debt ceiling debate to be resolved, perhaps with Satan sandwiches for lunch on the Hill, some diversion. Perhaps the mancession has especially inspired this summertime ingenuity: Crop circles 'created using GPS, lasers and microwaves':


Traditionally planks of wood known as "stompers" and lengths of rope have been used to make accurate patterns in fields, with designers even using bar stools to hop from one flattened section to another.
Other theories of how the patterns appeared over the centuries include freak wind patterns, rolling hedgehogs, copulating couples and, in a 1678 report, the actions of a "mowing devil".
More recently, conspiracy theorists have linked the patterns to UFOs or other alien activity, though some hoaxers have admitted to deliberately imitating flying saucer "nests".
More than 10,000 examples have been documented in the past 500 years, with one new pattern now appearing somewhere in the world every summer evening.

At a time of such grave uncertainty, our president and our media reassure us Michelle still thinks he's cute.

Lasers?! Microwaves?! I bet there's radiation on those sites too...

Do we need anymore proof that ETs are doodling in our fields! It's a a massive COVER UP!!! :) LOL

I thought we needed a fresh perspective to make sense of everything:)