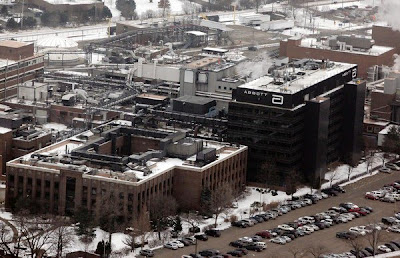 Pharmaceutical companies, long considered some of the most prolific moneymakers in American business, are coming under increased profit pressure from all sides, including generic drug companies, the new health care reform and government regulators, which have stepped up scrutiny.

On Wednesday, Abbott Laboratories acknowledged the "challenging" environment and said it would cut 1,900 jobs, largely from its U.S. operation, with 1,000 of them in Illinois.

Drug and medical-product companies have been in the cross hairs of the FDA, and for legitimate reasons, say consumer groups and lawmakers.

He said the move would affect the taxes, housing and local businesses.
“Without the jobs, obviously, people pull back,” Stolman said. “Again, it hurts when things happen like this.”

Gee, and why would Illinois be a prime place to scale back? A job-killing death spiral, let us count the ways:

The plaintiffs' trial bar seems to have an iron grip on the courts in Illinois, with Cook County being rated as the third worst judicial hellhole in the country by the American Tort Reform Association (ATRA) because of the abundance of frivolous and abusive lawsuits there.[16] That includes ludicrous lawsuits on behalf of spectators at the zoo who were splashed by dolphins or a $425,000 judgment against siren makers in favor of firefighters who claimed that fire engine sirens were "too loud."[17]

Have Abbott's products suddenly become more life-threatening and less life-saving? I doubt it. Coupled with the Dem trial lawyers' affinity for suing anything that moves and ObamaCare it's open season on medical innovation and the next generation of near-miracle drugs.

A pro-life health-care policy involves accelerating the pace of medical innovation, by reducing the regulatory and financial burdens we place on the pharmaceutical and medical-device industries. That means strengthening the influence of market forces, as opposed to subsidies and price controls, on the development of drugs and devices. It also means streamlining the FDA so that innovative new therapies can reach the market more quickly and cheaply. It means minimizing, and if possible eliminating, the ability of federal bureaucrats to deny life-extending care.

Your risks are going up under ObamaCare. Count on it.
The new GOP House has repealed this destructive law. Our work is cut out for us as voters to stand with those legislators who roll back ObamaCare and brush back onerous regulations before more jobs and lives are destroyed.
More. Related: Tribune Court tosses out Illinois construction program, video poker

TAS: Rahm Seen His Opportunities and He Took 'Em. And thanks to him Chicago is now a laughingstock.
Rahmbo for Mayor and Governor Quinnocchio for President!!!
More. Tribune editorials here and here. And bankruptcy should be an option for this state. Jeb Bush and Newt Gingrich, LA Times Op-ed:

During the 2008 financial crisis, the federal government reacted in a frantic, ad hoc fashion, tapping taxpayers for bailouts galore, running roughshod over the rights of bondholders and catching the American people unaware and unprepared. In contrast, we still have time to prepare for the looming crisis threatening to engulf California, Illinois, New York and other state governments.

The new Congress has the opportunity to prepare a fair, orderly, predictable and lawful approach to help struggling state governments address their financial challenges without resorting to wasteful bailouts. This approach begins with a new chapter in the federal Bankruptcy Code that provides for voluntary bankruptcy by states, a proven option already available to all cities and towns across America.

I think it is the only way to save us.
As Illinois in a Dem stranglehold goes, so goes the country. Unless we act to stop this unfolding catastrophe. On so many fronts.
More. The real snow job in D.C.: Obamacare waivers skyrocket to 729 + 4 states; 4 new SEIU waiver winners. Michelle Malkin
Posted by Anne at 1/27/2011 09:09:00 AM