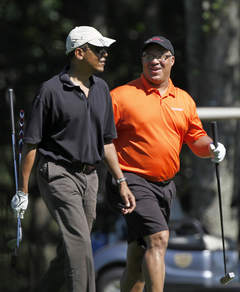 Chicago Sun Times (Ha. What's gotten into the Chicago media lately. Maybe losing the most jobs in the country, month after month):

The indictment of a Chicago nurse accused of diverting hundreds of thousands of dollars in taxpayer funds for her personal use has turned a spotlight on an Illinois state agency that awarded her money while it was headed by one of President Barack Obama’s closest friends, Dr. Eric E. Whitaker, records show.
Under Whitaker, the Illinois Department of Public Health awarded Margaret A. Davis — the former program director of the Chicago Chapter of the National Black Nurses Association — a no-bid contract and seven AIDS- and cancer-related grants that became part of her $500,000 cash-siphoning scheme, prosecutors say.
According to federal subpoenas and other records, Davis’ June 9 indictment by a federal grand jury in Springfield is part of a larger criminal investigation involving the health department and other state agencies.

Yes, there are other agencies being looked at as well. Can we recall Whitaker was hired for the job by Blago on Obama's recommendation. The Sun Times doesn't mention Tony Rezko was the go-between. (Who still hasn't been sentenced, by the way) Nor the deeper history of the Illinois Health Facilities planning board--

Part of the Obama Master Plan.

Good guys who blew the whistle on this board are still being menaced in Illinois by Blago's henchman successor as governor.

While the Rahmfather, back as Chicago mayor trying to get city-owned casinos approved, can't remember cronyism run wild Solyndra:

Another O fundraiser linked to Solyndra

...part of the crisis he, Barack and Valerie didn't let go to waste.