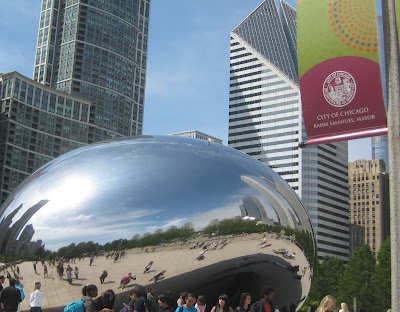 Bill Clinton breezed into town, extolling his own virtues with his usual charm, probably drawing more people to see him than President O in Ohio. Rahm and the city take the spotlight in the run-up to the May NATO splash. Bloomberg does a profile with Rahm on the roof, adding to his stature:


Chicago retains its ranking as the third-largest U.S. city, although its population dwindled by 192,000 in a decade, to 2.7 million as of 2010, census figures show. That’s the largest drop by far among the top 10 metropolises. Its four municipal pension funds face a combined unfunded liability of $14.7 billion, equal to $5,473 for every man, woman and child in the city. The public school system projects a second year of $700 million deficits.

These conditions feed Emanuel’s restlessness and impatience. The 5-foot, 8-inch (1.7-meter) politician has a tendency to begin sentences with “Look,” and end them with “OK?” On a late-February morning at City Hall, Emanuel drops in on a committee hearing on technology for people with disabilities. “Happy to be here,” he says. He never sits. Four minutes later, he’s ouhe door, saying to his appointees, only partly in jest, “Don’t screw it up.”

He's managed to reset a prohibitively expensive union contract, from a scandal-plagued sector of city hall. No word on the piggy pension contracts, for that he's looking to be bailed out by the state. OK?  Har de har har. Then there are the aldermen. To really bail the out the city he's pinning his hopes on tourism--other people paying his piper, arresting the decline so we don't end up like Detroit.

Oh yeah, Rahmbo's looking for an influx of free-spending French, doesn't matter to him whether they're spending their own money or dining out in aristo-socialist style, c'est la vie. But for sure we're getting the president and a parade of pols.

Is our President Barack Obama staying in his Rezko-financed manse in Hyde Park?


They chose a house with six bedrooms, four fireplaces, a four-car garage and 5 1/2 baths, including a double steam shower and a marble powder room. It had a wine cellar, a music room, a library, a solarium, beveled glass doors and a granite-floored kitchen.

Pourquoi pas? Not luxe enough for Michelle these days? Too close to Ayers and Dohrn (no questions, please) and the Occupy crowd? The One will be at a hotel on the north end of the Loop, snarling traffic in the city end to end, he and Mayor Rahm majestically passing by the Obama campaign HQ overlooking Millennium Park. Yes we can.
... P.S. Politico: Romney Narrowly Leads; Right Direction/Wrong Track Numbers Awful RCP here.