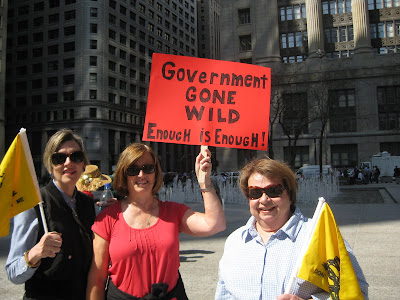 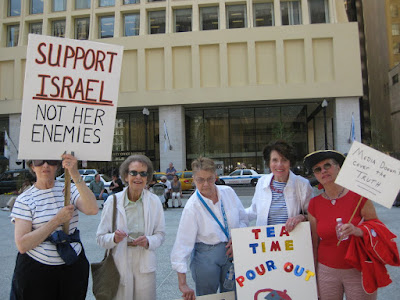 These are my friends:) You can see what a subversive bunch we are.
There were lots of great folks 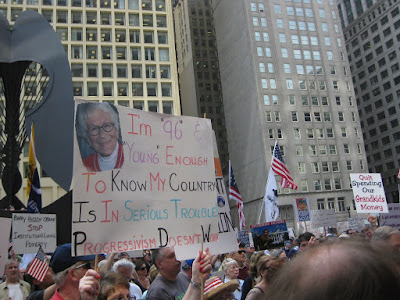 and a few counter-protesters, some with teabagger signs along the perimeter. Before the rally started, this lady wanted to arouse a big reaction (note the moustache on our former president) 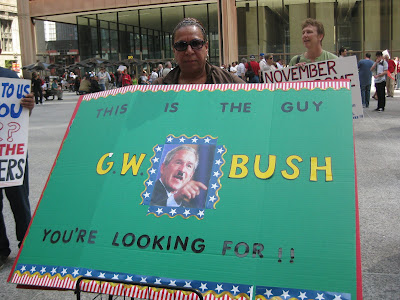 and had her camera out to record anything. She wasn't successful. As I followed with my iPhone recording her sidekick accused me of stalking, but she wanted to show me her other sign which she felt described Tea Partiers. See for yourself-- Nazi, Drug Addick, Media Whore. As the church bells rang across the plaza.During the rally itself this man thrust himself close to the stage waving an Arrest Bush sign. Video follows--most people ignored him but one hothead grabbed his sign and threw it on the ground. I picked it up and handed it back to him, though I didn't agree with what he was doing. Others in the crowd defended him as well even though they didn't agree. The media crowded around. Then someone else grabbed the sign and threw it on the ground again--which was wrong. By this time the police came and escorted him off the premises as he was disrupting the rally--we did have the permit after all.One more video--Republican candidate for the 9th congressional district, challenger to the shameful Jan Schakowsky, Joel Pollak sang an original song, sure to be a Tea Party classic!:)Lots more photos: 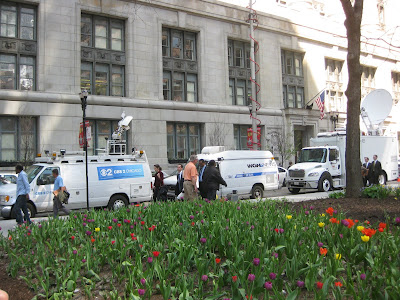 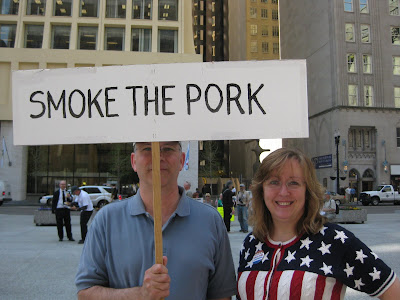 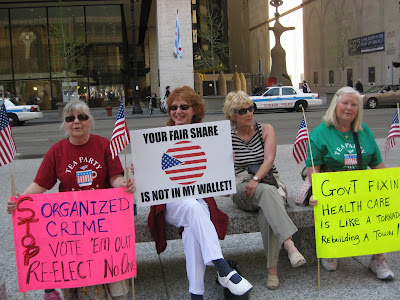 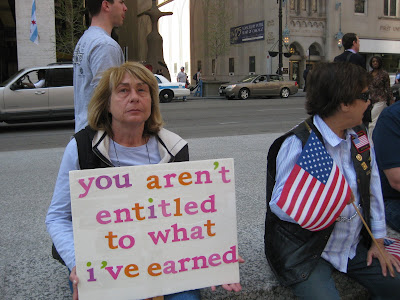 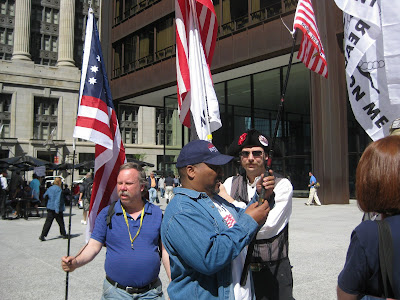 A U of C fan of Milton Friedman. 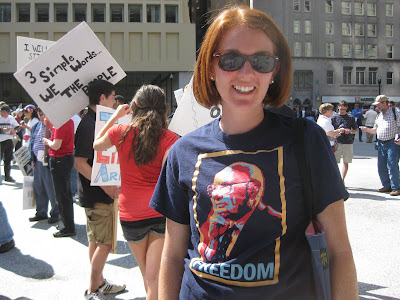 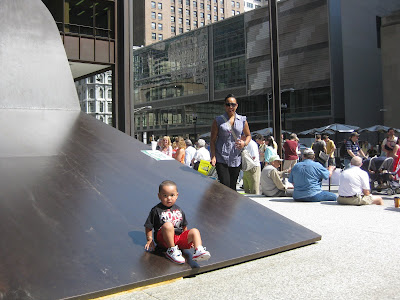 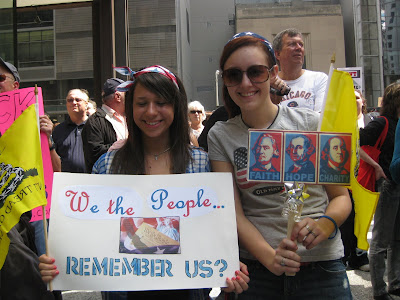 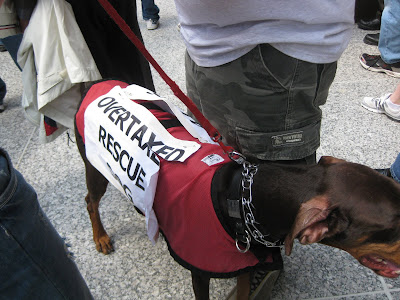 More pix and links to come.

UPDATE: Lots more of my Chicago photos here. CBS2Chicago--well, I'd argue about the size, I think we were pretty equivalent--and there were more tea parties around the area. Tribune roundup. WLS 890 AM Cisco Cotto was on stage (Uncle Sam hat great props), coverage and video.

More. My friend Lance Burri, with the Madison Tea Party. Michelle Malkin on Crashers FAIL. Pundette at the DC rally. And So it Goes in Shreveport in the Bayou State. Carol's Closet in Tampa. Nice Deb at Kansas City Plaza.

More. Chicago News Bench up now with aerial photos. Estimates crowd at over 3,000. Marathon Pundit with more links. (Thanks) The Other McCain in DC as well.

UPDATE: Saturday, from Gateway Pundit comment. I did catch some of his interview with the Tribune on video, I'd have to listen to it again closely--he was blasting Fox News. [OK, yes, it's on the tape, someone asked him do you like Code Pink--and he eventually said yeah, I do. Around 0:56-1:07] I did see counterprotesters on the perimeter with teabagger signs, they had don't spit on me stickers parodying the gadsden flag, trying to make hay over the fake race incident in DC. One had on a Code Pink button and a Che button. I have some more footage of that I could try to isolate.

...will post soon. UPDATED. Video: When I talked to this guy I was thinking of the Black Book of Communism, 100 million dead, so I had to correct myself. Background here and here.) Tres Che Chic. Obama Responds on Che Flag.

Great pix and video, Anne! thanks for posting...

Well done, Anne! You and Rubes are the real deals

This is a super post. I did one too, but didn't take such great pics as you, and all your round-ups. Well done.