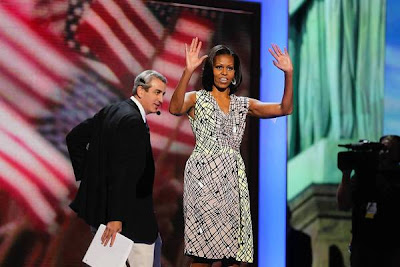 But even the NYT is off the reservation, shedding light on the shadowy power-wielding Valerie Jarrett, the Night Stalker. Then there's this one: Did the New York Times Just Get Obama Fired? I see Bill Clinton and friends' hands at work (one prominently voting for Romney). If he has to make a speech for party unity he's gonna get his digs in.

So can Me-chelle, forgoing her customary glitzy vacay this summer, close the deal?


Carmen Fields, a Democratic delegate from Needham, Massachusetts, said Michelle Obama has gone “beyond” her expectations as a first lady. Fields said she expects this speech will be easier for her to give than the one four years ago, in part because Michelle Obama can emphasize what the president has done.

Empty chair at the ready.


Yes. The mussed hair was genius:) 1st thing I noticed:Just how wrong did the media get Clint Eastwood hotair.com/archives/2012/… via @hotairblog
— Anne Leary (@backyardconserv) September 4, 2012

But no worries, Me-chelle's at the ready as First Celebrity.

P.S. Rahmbo making a quick exit. As I said, just going through the motions. Because he's dealing with all the fallout from the Obama Dem paradise in Chicago Illinois.

More. Convicted of vote fraud, head of Ald. Moreno’s political group sees his record wiped clean by Quinn
And some more insight on the Chicago Way:

He has been at the forefront of one of the 1st Ward’s most controversial issues, joining Moreno in pressing the Congress Theater to take greater crowd-control measures after a rape occurred nearby during a show last year.
Congress Theater owner Eddie Carranza, who faces the possibility of losing his liquor licese, has accused the alderman’s office of pushing him to hire members of the 1st Ward First group as security guards.

Elias and Moreno say they only suggested that community members would be best qualified to help patrol the area around the concert venue and never demanded that Carranza hire their political allies.

Yes, that Moreno. You see how it works? Thugs.

And Obama wants this for the whole country.

Related posts: the myth of a democratic socialist society funded by capitalism is finished,  Chicago's Problem in a Nutshell, Chicago Values, Revisited. Is God a Cosmic Wimp?
Posted by Anne at 9/04/2012 08:57:00 AM