IL 08 Dem candidate Tammy Duckworth erupted the other day at an oh so civilized WTTW forum. Sitting next to Rep. Joe Walsh (R-IL) at the table, she accused him of wanting to let women die.

She accused him of wanting to let women die.

So let me ask you Tammy, do you weep for Tonya Reaves.

Tonya Reaves bled to death over the course of hours

Life is a gift.

...Didn't I hear you say something like that somewhere in the debate, Ms. Duckworth.

In the 70's Roe v Wade froze debate in the states over abortion, where issues of medical ethics, life and medicine evolved as the Hippocratic Oath and democratic process dealt with it. If it's ever repealed, it will only go back to the states to decide--as it should.

Now we have outbursts like this from those who want to represent us in Congress. Where civilized debate should be the order of the day. 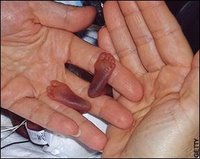 And let me ask you this too, Tammy, since you believe it's OK for women to be able to have abortions up to the moment of birth--and that we should pay for it--when cameras now can look at babies in the womb and they can be saved as preemies months before they would naturally be born, how can you deny that abortion is barbaric used as birth control.

And where is the media on this? Do we see coverage of Duckworth's, to many of us, extreme position?

How can you deny that taking of an innocent life.

And do you weep for Tonya Reaves

P.S. More from a friend:


What is "extreme" on the abortion issue?

Advocating the legality of all abortions, at any time, for any reason, right up to and including the moment of birth (a.k.a. partial-birth abortions).
Advocating the legality of "after-the-fact" abortions.. that is, the killing of a child after being born alive due to a botched abortion.
Mandating that taxpayers fund abortions and abortion-causing drugs (such as RU-486).
Mandating that all participants in insurance pools, including even employees of schools and charities that oppose abortion, must provide insurance programs that cover abortion.

All these are tenets of the Democratic Party in the era of Barack Obama and Tammy Duckworth.

Another: Even Eleanor Clift gets upset with Dems.

[thanks for Blog of the Day, Professor Jacobson]
Related posts:


Dems pat women on the head, give 'em a lollipop

, Obama would deny Mother Teresa, if newborns may be killed, why not two-year-olds,  When a government official can publicly state that not having children is a cost control measure it is a very short step to mandating how many children are appropriate for a woman to have. This is how China got to forced abortions. THAT is a real women's rights issue. , Cardinal Dolan: Don't Impose the Unconscionable
Posted by Anne at 10/20/2012 02:04:00 PM