Michelle O on the Trail. OccupyThat 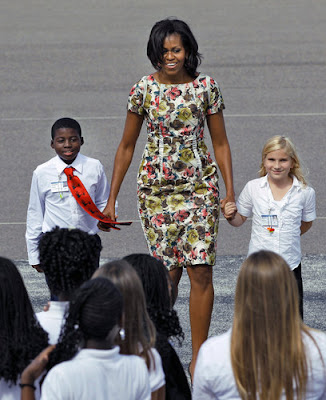 O sure, Michelle is "upbeat" according to the NY Times:

If the initial stage of her time as first lady was identified with glamour (magazine covers, a high-flying social secretary) and the second was about advocacy (for child obesity prevention and military families), she is entering a third stage: as an upbeat ambassador for a struggling administration, and more than at any time since the inauguration, a designated narrator of her husband’s story.

At her White House events, she avoids any mention of re-election, to avoid seeming overtly political. And there are no big public campaign events yet, no huge crowds she is rallying to vote. But she is stepping up her private events, with one goal: throwing the considerable force of her personality into rousing deflated, restive fund-raisers and volunteers.

“Her mission is to energize folks and give them encouragement to go out and do the work,” David Axelrod, Mr. Obama’s chief strategist, said in an interview.

A play for a kinder, gentler, "Barack will make you work", but we have seen her in action already on the campaign trail and it's a reprise of (a bit of my old lost Uncorrelated post) Mrs. Grievance with a vengeance--more class warfare. Even Ms. magazine has noted O's drop in the polls among--10 points since 2008 to date:


According to analysis taken from Rutgers Center for American Women and Politics, women played an important role in Obama's presidential victory in 2008, with Obama winning 58 percent of women's votes overall. A Gallup poll taken in October found that Obama has a 48 percent approval rating among women.

Gee, I wonder why. You can sense the desperation--but we have a fawning and complacent press.

Oh, wow, hanging out with an old sanitized radical pal of hers and Ayers:


The president does fund-raisers too, but “she has the freedom to be fully passionate,” said Marilyn Katz, the owner of a Chicago public relations firm and a longstanding Obama supporter who attended the first lady’s event. “There’s a kind of constraint that comes with the office, and she can be the unbridled campaigner.”

...hmm, looks like a variation of Hillbuzz' favorite dress. Or the same old, same old. What do you think?

Does she occupy that dress or what.


Female voters, who comprise a majority of the electorate, are primarily concerned with the economy, according to most polls.
They are breadwinners in 63 percent of households, yet they make only 77 cents for every $1 men make -- something Obama promised to change.
More than half of women said their financial well-being is less secure now than it was three years ago and six in 10 disapprove of the way Obama is handling the economy, according to Global Marketing Research.

(Not that discredited old canard about the pay gap. And some recognition of the Mancession, please.)

Related posts:  She told her kids that Santa is poor this year,  Women comfortable in their own skin, Girls Just Wanna Have Guns, They're not swooning for O any more, Women take the long view, drop O in droves, Obama base threatened: affluent suburban voters may vote R on economy, More confirmation Obama losing women
Posted by Anne at 11/18/2011 01:49:00 PM

48% of women still like Obama. I wonder if they like him enough to make it to the polls next November.