Pilots are Beyond Fed Up, Public Cattle 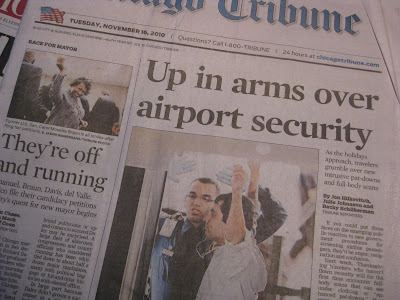 Front page Chicago Tribune on the new O'Hare experience. More from pilots. Even Sully speaks out:

"I would say that pilots are beyond fed up," said Tom Walsh, a pilot and sometimes aviation security consultant. "The TSA is wasting valuable time and money searching the crew — who are not a threat."

Even one of the nation's most celebrated pilots, Capt. Chesley "Sully" Sullenberger, has detected the growing unease.

"The fundamental reason is that airline pilots are already the last line of defense for anyone who poses a threat to the airplane," said the soft-spoken Sullenberger, who successfully ditched his US Airways plane in the Hudson River last year after it struck birds during takeoff. "We are — and would like to be considered — trusted partners in that important security mission."

The more intrusive approach might be defensible if it were a huge obstacle to terrorists. But a determined killer could wreak horrific damage in a busy airport by setting off a bomb at a ticket desk or in a security line. And neither the scanners nor the pat-downs would catch an al-Qaida operative who conceals a bomb in a body cavity — as one did last year before blowing himself up in an unsuccessful attempt to kill the head of counterterrorism for the government of Saudi Arabia.

Last year, the House of Representatives voted to bar the use of scanners for primary screening, and their expanded use may attract new attention on Capitol Hill. Congress and the Obama administration owe the public a reassessment to make sure the benefits of these methods are worth the high cost in privacy — and to make sure there are not other technologies that would be less invasive.

We need a reassessment pronto.

The TSA one size fits all cattle call cattle prod is bureaucracy at its worst--invasive and ineffectual.

I can’t wait for the lucrative TSA black market in naked body scans of 15-year-old boys and girls — and those of famous celebrities.

I can’t wait either for the next so-called “necessary” safety measure. Scanners don’t detect contraband in body cavities. Get ready for airport colonoscopies and gynecological exams. Why not? We all know the safety-first hysterics idiotic mantra: “If that colonoscopy saves one life...”

More. Meg McLain Singled out by the TSA, Cuffed to a Chair, Her Ticket Ripped up (Audio)

Did you know that the nation's airports are not required to have Transportation Security Administration screeners checking passengers at security checkpoints? The 2001 law creating the TSA gave airports the right to opt out of the TSA program in favor of private screeners after a two-year period. Now, with the TSA engulfed in controversy and hated by millions of weary and sometimes humiliated travelers, Rep. John Mica, the Republican who will soon be chairman of the House Committee on Transportation and Infrastructure, is reminding airports that they have a choice.

Read on about the moronic TSA approach. And this reminder:

In a May 2010 letter to Department of Homeland Security Secretary Janet Napolitano, Mica noted that the GAO "discovered that since the program's inception, at least 17 known terrorists ... have flown on 24 different occasions, passing through security at eight SPOT airports." One of those known terrorists was Faisal Shahzad, who made it past SPOT monitors onto a Dubai-bound plane at New York's JFK International Airport not long after trying to set off a car bomb in Times Square. Federal agents nabbed him just before departure.

More. Did y'all know this, from back in January: Most fake bombs missed by screeners 75% not detected at LAX; 60% at O'Hare:

At Chicago O'Hare International Airport, screeners missed about 60% of hidden bomb materials that were packed in everyday carry-ons including toiletry kits, briefcases and CD players. San Francisco International Airport screeners, who work for a private company instead of the TSA, missed about 20% of the bombs, the report shows. The TSA ran about 70 tests at Los Angeles, 75 at Chicago and 145 at San Francisco.

The report looks only at those three airports, using them as case studies to understand how well the rest of the U.S. screening system is working to stop terrorists from carrying bombs through checkpoints.

From John Stossel, back then as well:

After 9/11, the Senate voted 100 to 0 for the TSA. Tom Daschle said “you can’t professionalize if you don’t federalize.”

What nonsense. It’s instinctive to think that the government will step in and do things better, but it NEVER DOES. Private contractors at least have to compete to keep their contracts. You can’t fire the government.

Israel once had government-run security, but privatized in 1995. Since then there hasn't been a single hijacking.

Rafi Sela, president of the Israeli transportation consulting group AR Challenges, and a former security consultant with the Ben Gurion International Airport, told me that the US government is taking on too many roles.

"The problem in America is that from day one the US decided to hold the stick on both sides. Which means it's both the regulator and the operator, which is unheard of in [Israeli] security… [here it] is all done by private contractors.”

...Even those socialists in Europe use private contractors. From 2006. Time to Rethink Airport Security

The TSA's dual role creates a serious conflict of interest. As one airport director said to a Chicago Tribune reporter in the early days of the TSA, "The problem inherent in the federally controlled screening process is that you end up having a fed­eral agency sitting in the middle of your terminal, essentially answerable to nobody."[9]

And excuuuuse me for mentioning this but there's an article in the WaPo today about the Mumbai plotter--you know, the guy who hung out in Chicago.

More. Reason TV: Coming Soon to an Airport Near You: Prison-style Strip Searches?